With her stunningly pure voice I’ve always considered Rose to be a talent worthy of greater recognition. This was an excellent trio performance with the singer well supported by her colleagues. 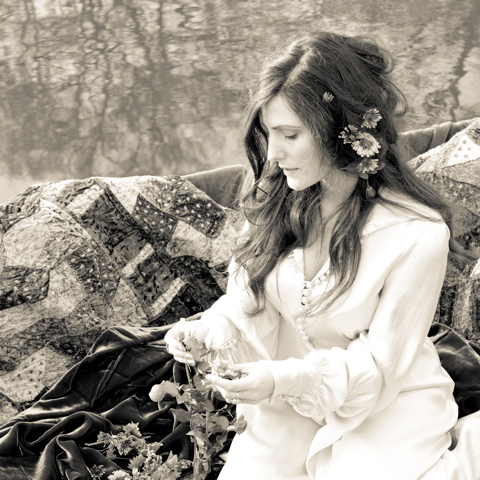 Welsh born, Worcestershire based, singer, songwriter and guitarist Deborah Rose has been a regular figure on the Jazzmann web-pages in recent years albeit with some of the other entries published under her former name of Deborah Hodgson. With her stunningly pure voice I’ve always considered Rose to be a talent worthy of greater recognition and tonight there were encouraging signs that her reputation is starting to grow with a number of audience members seeing her for the first time following Rose’s appearances on both local and national radio (of which more later).

To date Rose’s recorded output has consisted of a number of self financed EP’s, all of which have been highly accomplished and have acted as good calling cards but I think it’s fair to say that a full length album release is long overdue. This situation should be rectified later in 2013 with the release of “Song Be My Soul”, a collection of original songs and settings of poetry with Rose often blurring the distinctions between the two by adding her own words to established texts. A singer raised in the folk and art song traditions she draws much of her inspiration from the poetry and visual art of the Romantic movement.

As well as being a talented vocalist and songwriter Rose is also a tireless organiser and is the musical co-ordinator of the successful supper and music evenings that have been taking place at the Tarc Gallery in the heart of the Worcestershire countryside over the course of the last eighteen months or so. I have attended several of these popular and enjoyable events in recent months and as well as hosting the evenings Rose has usually delivered a brief twenty to thirty minute supporting set as well as making cameo appearances with headline artists such as the duo State Of The Union (Boo Hewerdine and Brooks Williams), rising star singer songwriter Stephen Langstaff, and, in a rather different context, Tom Hill’s Blues Trio.

After seeing Rose as a support artist on many occasions (she’s also appeared opposite New Yorker singer songwriter Kenny White and supported folk legend Judy Collins at Worcester Cathedral) it was good to see her playing a full two sets as a headliner for the first time. Being so close to Valentine’s Day tonight’s event had a loose “romantic” theme and although most of the tunes weren’t “love songs” per se Rose’s material was nevertheless Romantic with a capital ‘R’. She was joined by two of her favourite and most trusted accompanists, pianist and songwriting partner Martin Riley and cellist Catherine Harper, the latter returning to musical activity following twelve months off which culminated in the birth of her young son Charlie. Welcome back, Catherine.

The evening began with Rose’s original song “Taigh Allain”, one of her most beautiful melodies and a tune that has been recorded more than once on her EP’s. The title is Scots Gaelic and means “beautiful house”, the inspiration for the piece coming from timeless holidays spent on the islands of the Hebrides. The tune not only demonstrated the purity of Rose’s voice but also the skills of her accompanists. Riley conjured a wonderful sound from his Roland Fantom G8 electric piano and Harper’s cello was suitably warm and rich on this evocative picture of the summer tranquillity of the Scottish Islands.

Rose’s “Lady Of Shallot” was inspired both by Tennyson’s poem and Waterhouse’s painting. She and Riley performed the tune at Birmingham Art Gallery when Waterhouse’s picture was exhibited there as part of a larger exhibition of Victorian art. Rose’s haunting depiction of Tennyson’s epic tale was written in conjunction with Worcester based pianist and composer Ian King who had accompanied her on her recent Tarc appearance opposite Kenny White.

Following the solemnity of “Lady Of Shallot” a little light relief occurred when the alarm on somebody’s mobile phone went off. The members of the audience had all diligently turned theirs off before the show, of course it was Deborah’s! She temporarily dashed off stage to switch it off and returned looking suitably embarrassed. As a regular gig goer I can pretty much guarantee that when a phone goes off in the middle of a performance it always belongs to one of the musos.

Rose recently gained some exposure on national radio when she was interviewed by Sir Terry Wogan. Among the subjects under discussion were Rose’s settings of poetry, the forthcoming album, and her admiration for the music of the late Eva Cassidy whose fiftieth birthday it would have been in 2013. Some of tonight’s audience were here as the result of hearing that interview.
In conjunction with Ian King Rose has set Cassidy’s poem “Springtime” to music and the piece is to be released as a single. An arresting melody allied to Cassidy’s simple but direct, evocative and poetic words may even result in a surprise hit. Rose has strong connections with Cassidy’s violin playing brother Dan who will be featured on the new album. Born in the US but now based in Iceland Dan Cassidy is a frequent visitor to the UK and recently played at the Tarc Gallery as part of his regular duo with Shrewsbury based guitarist and vocalist James Hickman.

If tonight’s version of “Springtime” was good then Rose’s arrangement of Sandy Denny’s classic “Who Knows Where The Times Goes?” was even better. The tune was originally recorded by Fairport Convention and remains one of that long running group’s most popular songs. It was also a US hit for Rose’s mentor Judy Collins, but I’ve never heard it done before quite as it was tonight, a haunting slowed down arrangement that wrung the maximum degree of emotion out of Denny’s appropriately timeless lyric – Denny died tragically at the age of thirty three, how could somebody so young write such a mature song? Tonight’s arrangement was enhanced by the melancholic timbres of Harper’s cello which granted the song an additional haunting quality.

The Rose/Riley song “It Gives Life To Thee” expanded upon the famous lines of the Shakespearian sonnet “Shall I Compare With Thee With A Summer’s Day”, “Darling Bids Of May” and all. Rose then took up her acoustic guitar for the first time as she and Riley performed a duo version of the traditional Irish folk tune “Black Is The Colour Of My True Love’s Hair” with Rose apparently drawing inspiration from Paul Weller’s version of the song (the thought of Weller covering this is a good deal less improbable than it might once have been). Riley impressed at the piano with a rare instrumental solo.

Rose now invited young singer Portia Reed to the stage to sing with Riley and Harper. The fourteen year old is a precocious and highly promising talent who also writes her own material and has already gathered enough material for a putative album. Tonight she chose to sing a version of Santana’s “Black Magic Woman”  ( your rather long in the tooth correspondent would like to point out that the song was composed by Brit guitarist Peter Green and originally recorded by the first edition of Fleetwood Mac). I’d seen Reed perform some of her own songs at the Tarc’s music & poetry evening in October 2012 and if I’m honest preferred hearing the original material to this cover. Tonight Riley provided sympathetic accompaniment and Harper added pizzicato cello to Reed’s soulful vocals but overall I found Reed more convincing when singing her own words. She’s a talent, that’s for sure and she should certainly persevere with her song writing.

Thanking Portia Deborah Rose returned to the stage to conclude the first set with the heart felt “Song Be My Soul” which borrows from the Welsh hymn tune “Calon Lan” (an acknowledgement of Rose’s roots) and includes the chorus “sing all day and sing all night”, a reflection of Rose’s love of words, songs and singing and pretty much a personal philosophy or mission statement.

A shorter second set began with Rose/Riley composed “Breathe In”, a contemplative piece with the lyrics inspired by the words of a Native American poem but acting as paean to nature that also seemed to embrace other philosophies from Zen Buddhism to the Gaia hypothesis. “We Are Made Of All Things” as the chorus had it.

Another Rose/Riley setting added additional lyrics to a rare Charles Dickens poem “A Child’s Hymn” (Dickens was primarily a writer of prose). This was another beautiful setting with Rose adding real beauty to the simple homespun wisdom of Dickens’ words. The singer told us that she had recently met a descendant of Dickens who had expressed her approval of Rose’s adaptation.

Previous appearances by Rose have always contained elements from the American folk tradition and beyond. Although the sources of inspiration for the majority of tonight’s performance were predominately British Rose turned to her mentor Judy Collins for a dash of Americana with a good natured performance of Collins’ folk/country classic “Someday Soon”.

Next came a return to Albion and another Rose/Riley setting, this time of the much loved William Blake poem “Tiger Tiger” with the sombre arrangement emphasising the genuine menace and inherent spirituality of Blake’s words. The poem is sometimes presented as an innocent children’s piece but as Rose emphasised here it’s far deeper than that. The recorded arrangement is to feature flute, violin (presumably played by Dan Cassidy) and a chorus of tree frogs!

The trio concluded an excellent evening’s music with their version of the jazz standard “Autumn Leaves”. Although Rose is not a jazz singer as such she placed her own stamp on the song by slowing down the arrangement and singing it in her own distinctive, well enunciated crystal tones. She actually invested the words with far more emotion than the average jazz singer with the melancholy ring of Harper’s cello adding to the fragile mood. Rose, Riley and Harper actually managed to bring something new to a piece that has become somewhat hackneyed in jazz circles.

Speaking to Deborah afterwards I asked if she’d heard the settings of poetry by the late jazz pianist, bandleader and composer Michael Garrick (1933-2011) but it seems that she hadn’t. Garrick’s last album “Home Thoughts”, released posthumously in 2012, includes settings of Shakespeare and Blake but it would seem that Rose and Garrick, essentially musicians from different generations and traditions have converged at a broadly similar point through their shared love of poetry and literature. Interesting.

This had been another hugely enjoyable and successful evening at the Tarc Gallery with a sell out audience. Deborah Rose can always be relied upon to deliver and she was well supported here by her two sympathetic and highly accomplished colleagues. 2013 promises to be a big year for Deborah Rose with the release of “Song Be My Soul”. Here at the Jazzmann we wish her well as she continues to develop her already very promising career.