I’ve just returned from a life enhancing trip to Maryland, USA performing at a Renaissance Festival and meeting some very special people.

My calling to Maryland began a year ago with a song I had created “The Lady of Shalott,” inspired by the pre-raphaelite John Waterhouse painting. I sent it to Washington DC National Gallery of Art where the original painting was being exhibited. The press officer, called Deborah was excited about the song, but had already scheduled musicians, so telephoned me with a list of 10 other contacts in the DC area of venues I could perform. I sent emails to each contact, and one responded. She was the director of the Maryland Renaissance Festival, Carolyn Spedden. She asked if I would be interested in sharing a stage with the Medieval Baebes. Coincidentally I had just seen them perform on the Isle of Wight in Ryde Cathedral. I applied for a temporary work visa and made plans to perform and release my first album “Song be My Soul” in America.

Most interesting in all of this is that Maryland is the hometown/state of Eva Cassidy, the late singer, whom many of you will know is an important inspiration to me, musically and spiritually. It was due to interesting connections on the Isle of Wight that three years ago Dan Cassidy, Eva’s brother, an exceptionally gifted violinist, visited me at my home in Worcester to arrange a concert for him at Huntingdon Hall, Worcester and later kindly recorded fiddle on the song “The Lady of Shallot” for my album. I then had the privilege of being a tour guide for his parents, Hugh and Barbara Cassidy, on their visit to the UK in 2011. The Maryland Renaissance festival site happened to be only a few miles from where Mr and Mrs Cassidy live. I was honoured to be invited to spend a couple of days with them in their beautiful home on the West River of the Chesapeake Bay.

On arrival at Washington Dulles airport strangely the first person I saw was Larry Melton, one of Eva’s long time friends, who now lives in the house where Eva grew up. He was also the double bass player in her band ‘Stonehenge’ at school, and I have met him in the UK a few times playing in the Dan Cassidy Swing Band. We were both stunned to see one another! I thought he had come as a surprise to collect me, but instead he was collecting Eva’s best girl friend Anna Karen from Iceland who was staying with them for a long weekend!  Anna Karen’s flight arrived at exactly the same time as mine. I was then invited to have dinner with them. I had heard so much about Anna, Eva’s best friend and how much they shared together, so it was very special to find myself in her company. She is a lot of fun and a great blues singer.  As if things couldn’t get any more connected, we go to a cafe bar next door called ’49 West’ and Eva’s father Hugh is playing cello with his band, and Eva’s mother Barbara is there too. There was much joy as we marvelled at this serendipitous reunion. 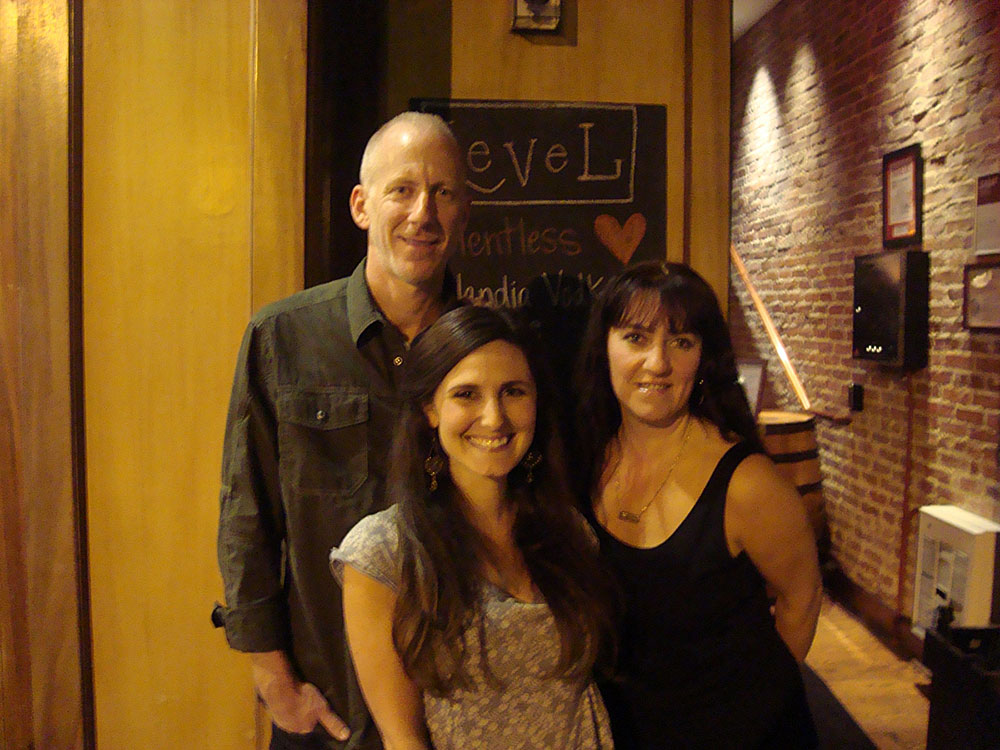 In my free time, after the first weekend of the Maryland Rennaissance Festival (which I will write about in more detail in my next blog) I was invited to stay for two nights at the Cassidy Residence in Shady Side, Maryland. They took me walnut picking at Black Walnut Creek, the walnuts make your hands very black, but worth it to make cookies and walnut bread! We walked through the woodland, and along the pier of the Chesapeake Bay and they openly shared they were Eva’s favourite places. I could understand why. Eva’s mother picked me a magnolia plant from the tree, and she said gently “watch it blossom.” It was amazing to see it sprout new bright red seeds every day. 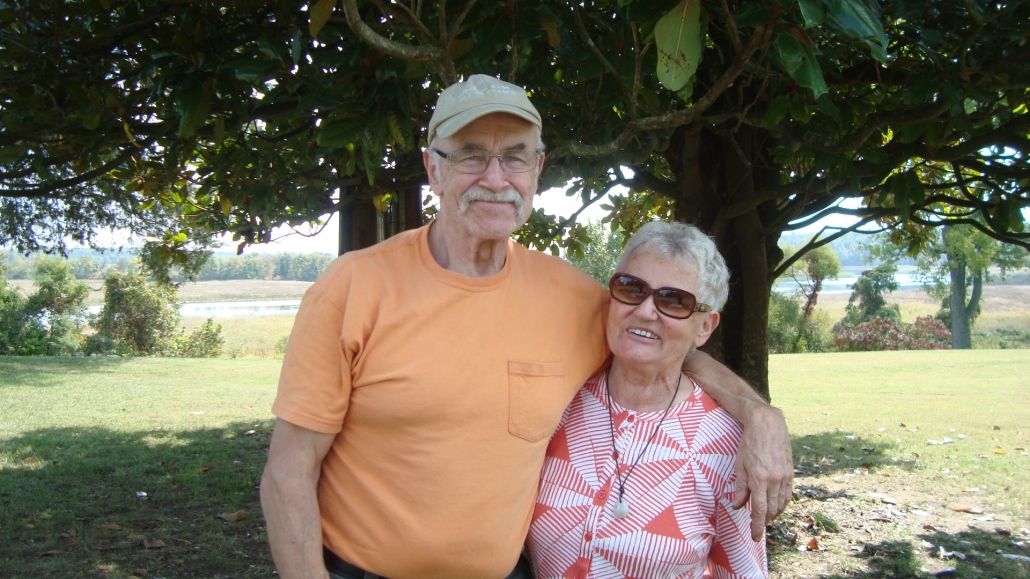 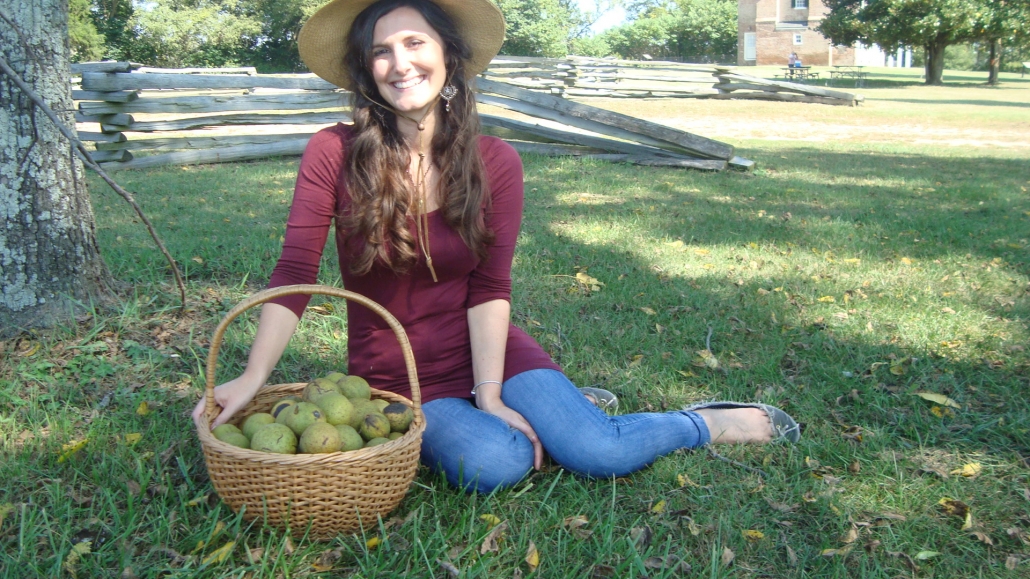 Hugh and Barbara’s home was like an enchanted garden. A place of peace, stillness, calm, and beauty. Butterflies, vibrant red birds, deer walking among the trees, and statues of St Francis and Mother Mary which Eva bought her mum as gifts. Their home was like a piece of heaven on earth. The room I stayed in had a painting done by Eva above my head, with pottery, craft and jewellry she had made. On the bed was a beautiful American patchwork quilt, handmade by Eva’s grandmother. An angel sculpture made by Eva’s father in her memory surrounded by rosemary, graced the garden, which overlooked the boats sailing on the bay. 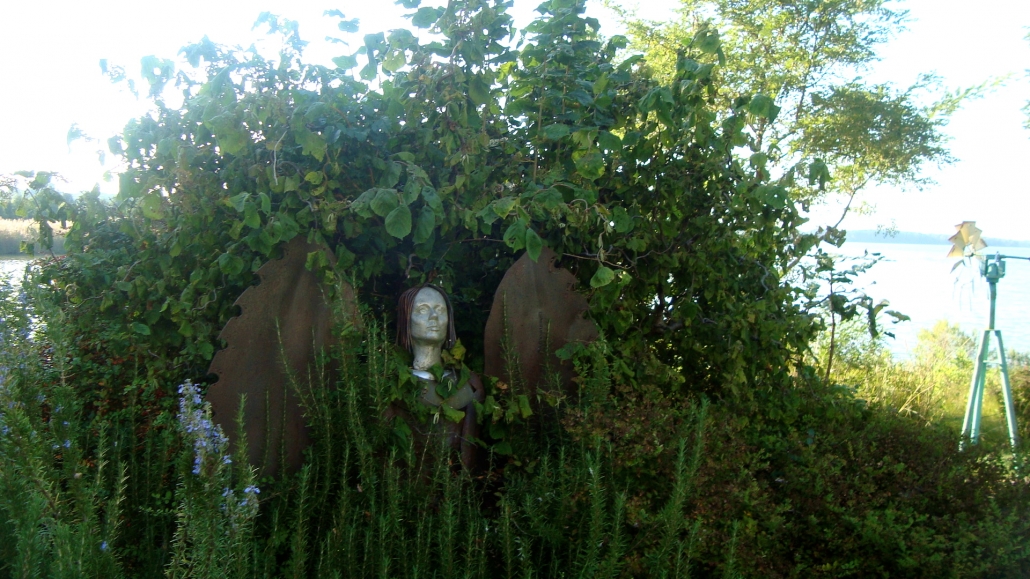 The music room walls were decorated with Eva’s unique paintings “The essence of Eva” and Hugh’s metal sculptures, inspired by mythology and legend. It was a beautiful creative space for a three hour guitar lesson with Mr Cassidy. He taught me a song “The river knows my name” and he explained the nashville numbering system. He is an excellent teacher, musician and artist. Eva’s sister Annette, who is a nurse and cared for Eva, visited while I was there, and I met the lovely neighbours. The warmth and kindness I experienced I will never forget. 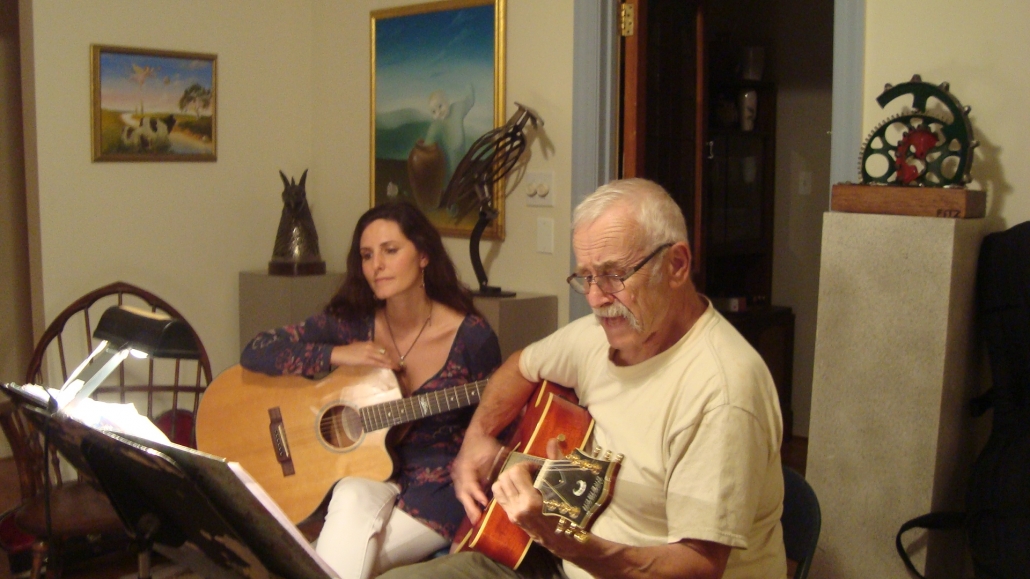 We were taken on a sailing boat around the bay by a close friend of the Cassidys, Richard Elmquist. We saw Osprey nests, crabbing nets, and ate bluefish. We sailed until it got dark..and a touch breezy! 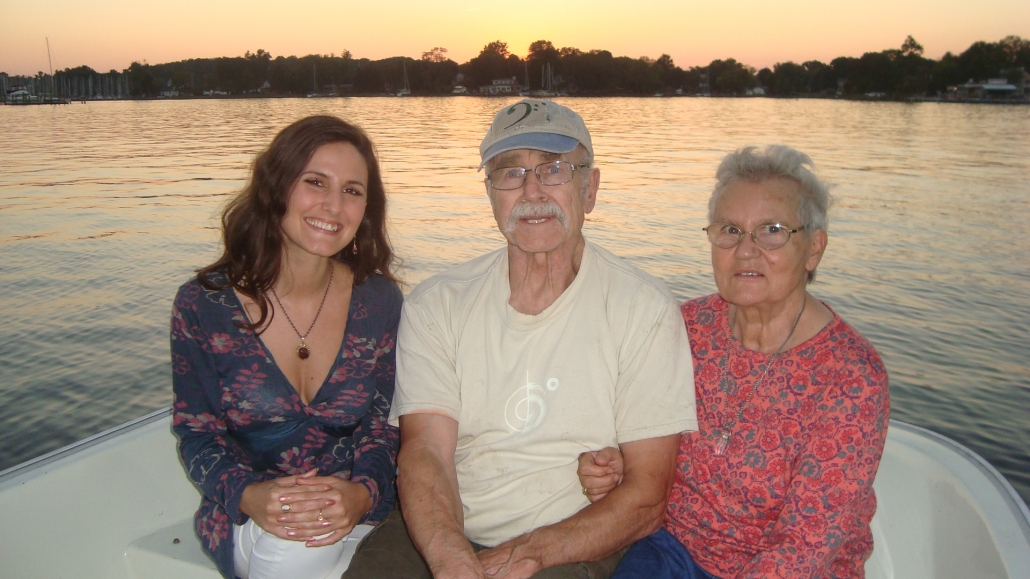 We had lunch at the Pirates Cove, a place where Eva and her Mum used to enjoy a drink together after working at Behnkes nursery. I experienced the famous Maryland Blue Crab. We were joined by Richard, whose boat  “The naughty lass” was moored at the harbor, and Rickie Simpkins of the Emmylou Harris’ band (who accompanied me at the festival) and his lovely wife Ann. Hugh has long been an admirer of Rickie’s music so for them to connect was a real joy to see. 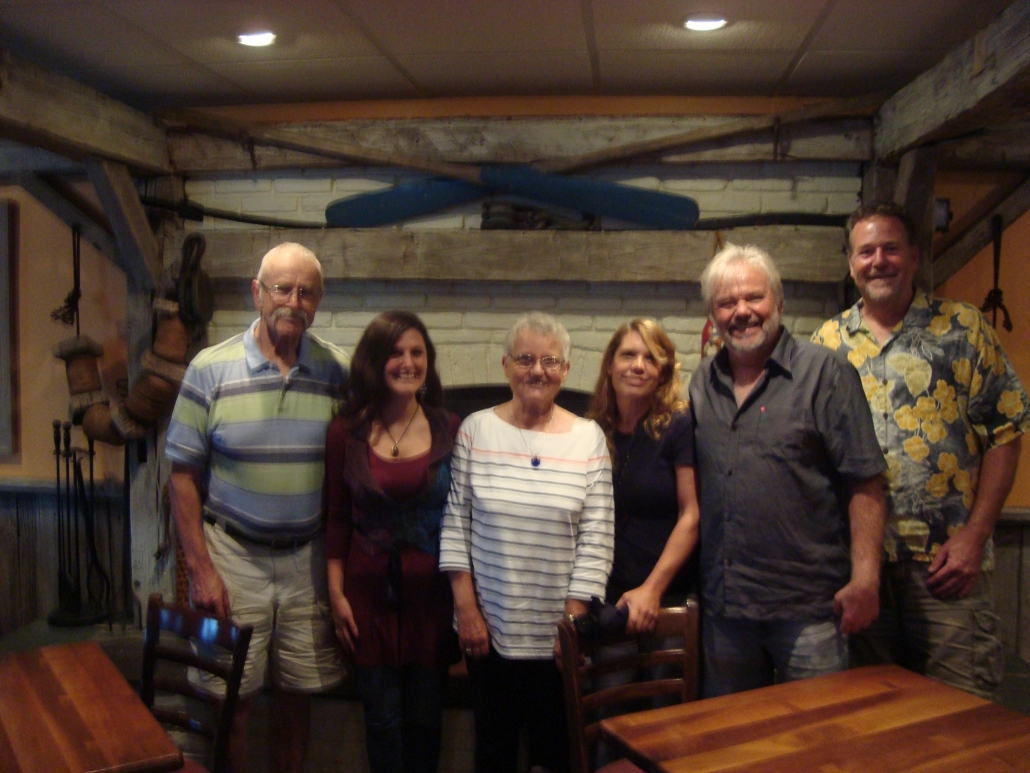 The BBC gave me a “flash mic” to take to America, as I am currently producing a radio documentary to commemorate and celebrate Eva’s 50th anniversary this year. It is set to be aired on BBC Hereford and Worcester this Christmas. It will be called “The Spirit of Eva”.  I interviewed Richard, the captain of our ship, who went to the same school as Eva in Bowie, and had an enlightening story to tell, which I can’t wait to share with you. The documentary also features Roberta Flack, Judy Collins and Eva’s boyfriend Chris Biondo all paying tribute to Eva in this vey special year. Mr Cassidy also said a few words. I was very relieved to return and find I had pressed the right buttons and the interviews had saved! 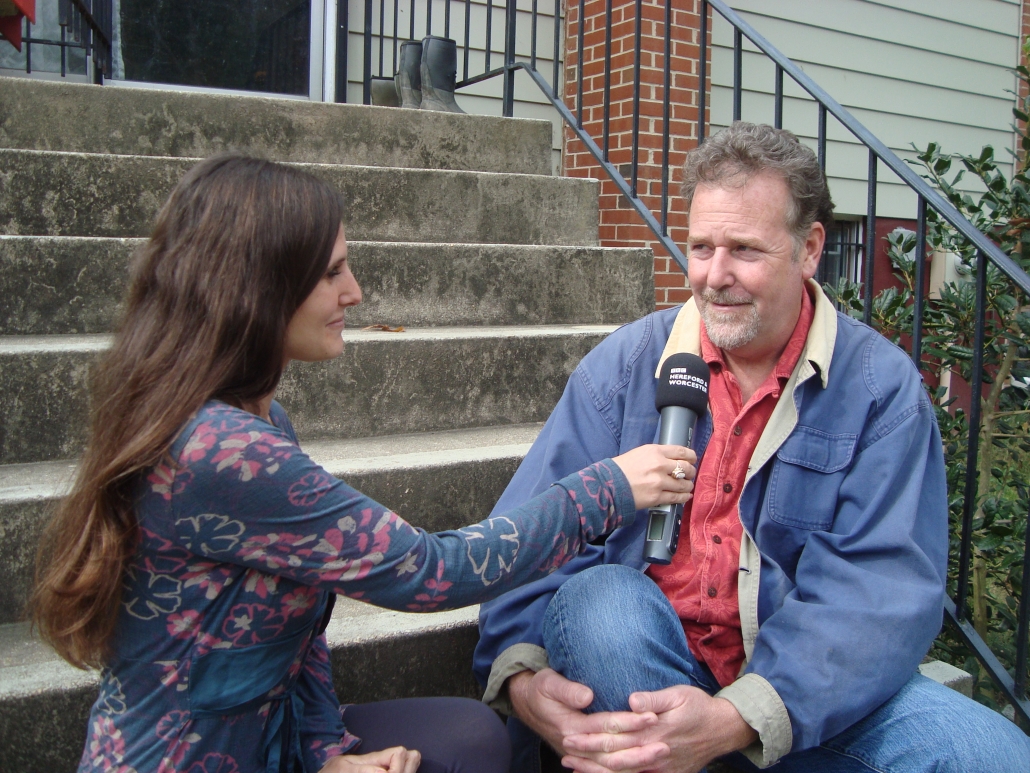 The whole experience in America was miraculous and in divine flow. I had been looking for a book called “The Course in Miracles” by the writer Tara Singh before I left, but could not find a copy anywhere. I mentioned this to Hugh and he reached to his book shelf and handed me his own copy of the book and a special box of cards to accompany.  Just as Eva’s poem “Springtime” which now appears on my album as a song, begins “Isn’t it a miracle?” .. each day brought new wonders of all kinds, without having to try, I allowed everything to unfold and “be” with a strong knowing of being in exactly the right place.

Before I came away, I researched Maryland and saw that it was named in honour of “Mother Mary” and that two boats had sailed from the Isle of Wight called the “Dove” and “The Ark” on St Cecilia’s Day to St Mary’s River in Maryland. I was on the Isle of Wight at Lord Tennyson’s 200th anniversary dinner when I first heard that Eva had a brother called Dan who played the violin, and since then met Eva’s family. I told this story to Mrs Cassidy, and she reached for a painting on the wall of the boat called the “Dove” and told me that St Mary’s River , a nature preserve was Eva’s special place. She visited the sacred church there often, and it was on the shores of this river that Eva’s ashes were scattered on St. Valentines Day after she passed in 1996.

When people ask me if I am an Eva ‘fan’ it doesn’t seem to fit as a word to describe how I feel about Eva, somehow she is more like a friend and a guide, as though she is still with us all in spirit continuing to do good and unite people across the world through love and music. Eva wrote a beautiful song called ‘Somewhere’ and poses the questions.. “Are the threads that bind us together falling loose or growing stronger?” Once in a lifetime, strangers share a common end.” “Look at the picture..has it changed or is it still the same?”. “Hear, hear hear.” Eva was kind hearted with a gentle nature, and universal vision. She cared deeply for the earth, animals and people, with hope in her heart for love and world peace.. and I believe her work here is not yet done. I feel our songbird is still weaving her magic and shining her light brightly from above.