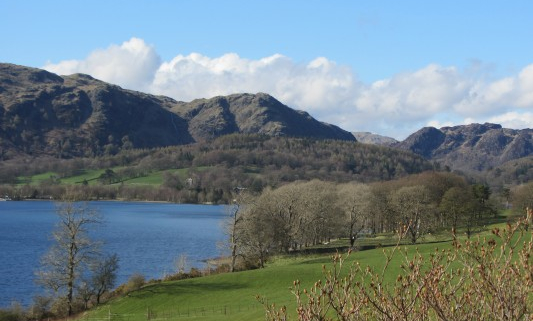 First of the ‘beautiful houses’ we visited as part of our music and poetry mini April/May tour was the former home of the great John Ruskin, Brantwood in the Lake District. He was a poet, artist, critic and social revolutionary who challenged the moral foundations of 19th century Britain. A pioneering environmentalist, he was founder of the National Trust, patron of the Pre-Raphaelites and an inspiration to Mahatma Ghandi. Quite a busy man! His philosophy was simple, “to live in harmony with nature, education for all and honest satisfaction in work.” It was humbling to be in the spiritual presence of this great man.

We performed in Ruskins’ drawing room with a stunning backdrop of Coniston Lake, made all the more special that it was the night of the moon’s eclipse. Performing with Martin Riley on piano and Jennifer Lee Ridley on flute we sang original compositions inspired by poetry to an intimate audience of local people, a couple from my hometown Droitwich and Bewdley (!) and a Canadian couple getting married in that very room. 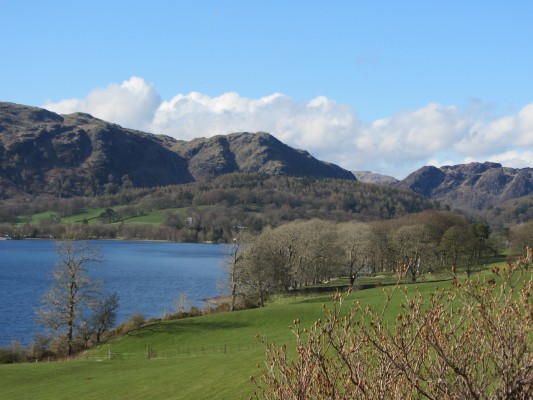 Ruskin has strong links with Worcestershire, his trust owning 20 acres of the Wyre forest and in 1887 he visited Bewdley where he had the idea of creating a farming utopia. This led to establishing 3 farms in the area, including Uncllyss Farm, which still operates today and has helped rehabilitate drug and alcohol victims by working there. It’s literally a stone’s throw from the Hop Pole restaurant where I have a singing residency.   (I’m there on May 29th by the way..do come along!)

It was lovely to have Jennifer perform flute with us, especially as Ruskins boat was called ‘Jumping Jenny’! See photo below. We met Jennifer at Swinburnes’ house on the Isle of Wight last year. She is a singer in her own right and sets Keats and Shakespeare to music, with unique guitar tuning, which we had the pleasure of hearing that evening.

En route we wrote a song based on Ruskin’s poem “Trust Thou thy Love” inspired by his first sweetheart ‘Rose La Touche.’  Rose caused Ruskin much anguish for 10 years refusing to marry him, and it is believed this contributed to the madness and hysteria he suffered in his final days. A portrait of her, painted by Ruskin hangs on the wall where we performed. 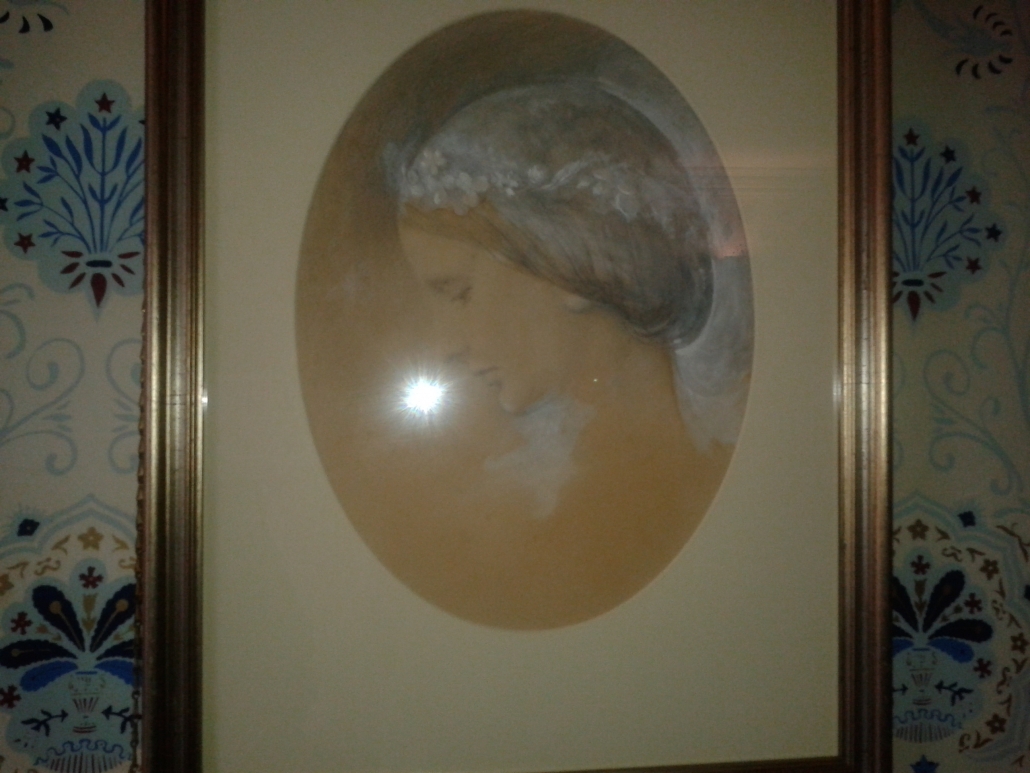 We stayed in the Lodge that Ruskin himself built and I felt very at home here. I grew up at ’79 Ruskin Avenue’ in Wales, home from home.. the completion of a circle perhaps?

One of Ruskin’s most famous quotes framed around the house is ‘There is no wealth but life’ and through the hundred of books and essays he wrote, a prophetic voice of the eternal values of human life can be heard. His journey was not an easy path, he sacrificed his own life to improve the lives of others, his legacy remembered and celebrated in this wonderful museum, Brantwood in Coniston, Cumbria, often described as a place of pilgrimage.

There is an intriguing light on this photo, and pretty much sums up how I felt about being here..alive, fully in the heart and connected. Thank you to everyone at Brantwood for making us feel so welcome. x

Second stop was the Isle of Wight for a performance at Dimbola Lodge, the home of the pioneering Victorian photographer Julia Margaret Cameron. A brave woman ahead of her time, ambitious and free thinking she made and mixed her own chemicals (including gun cotton, a dangerous explosive) to produce some of the greatest portraits of the nineteenth century. Neighbours with poet Alfred Lord Tennyson (they walked the downs together daily), friends with Lewis Carroll, Thackeray, Edward Lear and Darwin, she created a central meeting point for a crowd of bohemian artists. On the wall reads “Is there no one who is commonplace here? Is everybody either a poet, or a genius, or a painter or peculiar in some way?” This is true of today, and why I love this place so much.

We performed to a full room, a repertoire of music inspired by Tennyson, Dickens, Shakespeare, and Rossetti, with a photo of the Mad Hatter at the back of the room promoting the newly launched ‘Alice in Wonderland’ exhibition. It was Julia Margaret Cameron that photographed the young girl Alice Lidell, who inspired Charles Dodgson aka Lewis Caroll to write Alice in Wonderland. Written on the wall attributed to Alice is “Think of at least six impossible things to do  before breakfast”! Everything is curiously wonderful here. 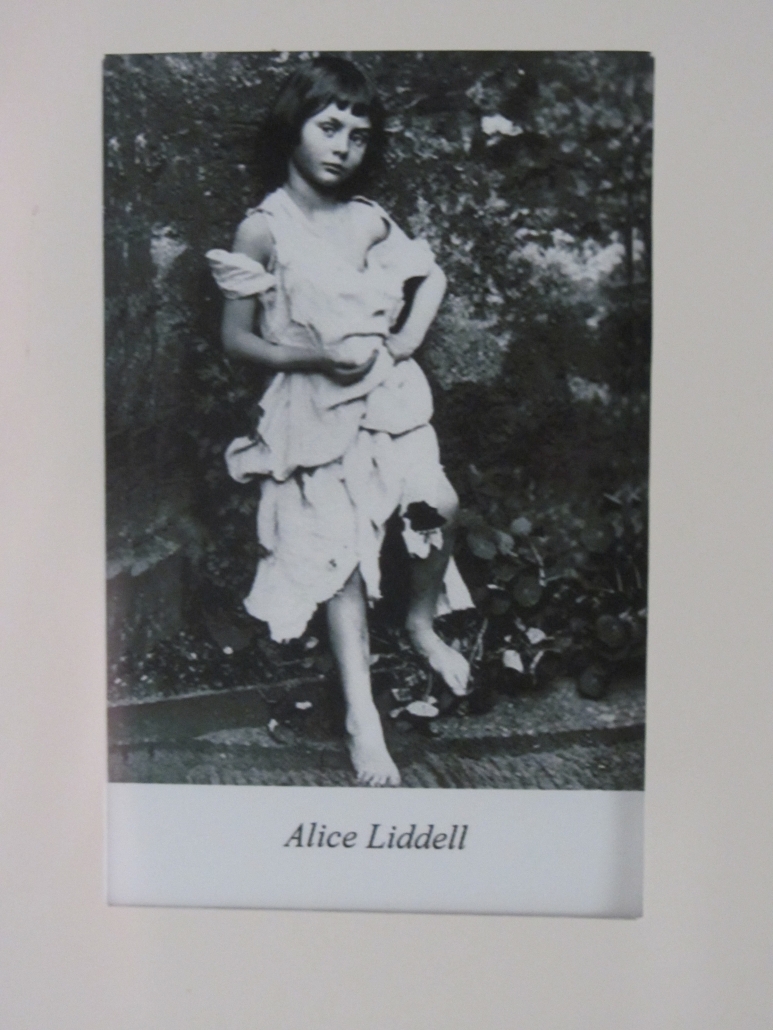 The girl who inspired Alice in Wonderland

Another interesting discovery for me was that Jenny Lind, the Swedish Opera Singer, who is buried in Malvern, had sung in the very room we were performing in, whose voice could be heard by the fisherman at freshwater bay. A victorian siren! Jenny Linds name certainly keeps appearing on my travels, again with strong Worcestershire links.

Exquisite portraits hang from the walls that move me in a way no other photographs do and I am reminded of my dear friend Claire Delaney, a young photographer I met ‘by chance’ whilst recording my album at the Hatch Studios in Tenbury Wells. She is one of the rare photographers today who can photograph like Julia Margaret Cameron and she learned her technique of ‘wet plate photography’ in America, which requires a certain temperature and alchemy! Photos for my album and youtube videos have all been done by Claire. Check out her wonderful art on www.clairejdelaney.co.uk

The next evening was our concert at Algernon Swinburne’s family home at East Dene, Bonchurch, joined by the world renowned accordian player Karen Tweed who now lives on the island, interspersed with readings from the great island poet Edmond Matyjaszek. Karen is an incredible light, gifted musician, and a fellow Pre-Raphaelite advocate. Edmond is a headmaster of a school on the island and I was lucky to meet him at Tennyson’s 200th anniversary celebration back in 2009. 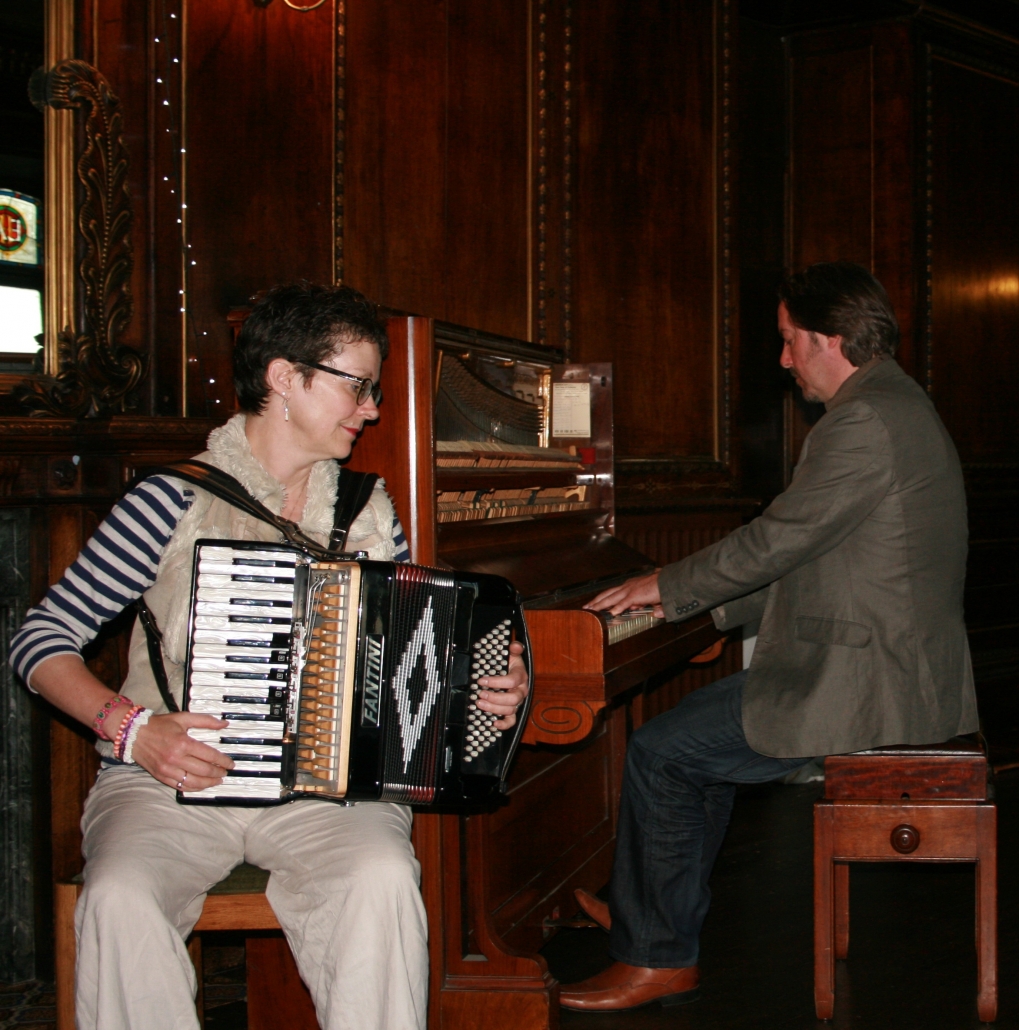 We improvised to a poem ‘a singer asleep’ which was Thomas Hardy’s tribute to Swinburne when he visited his grave. (This poem was given to us the night before at Dimbola by the curator and inspiring author Brian Hinton who I met at the Isle of Wight Festival in 2009). Edward’s amazing oration against Martin’s improvisation as I experimented with vocal sounds was a new way of performing that we will certainly do again. Martin’s piano playing on the Bechstein, was one of his finest performances yet, so much so, he did an after show recital for the residents of East Dene in their pjamas!

I loved performing in these two venues. The energy was different to any other place I’ve been. A few people in the audience were crying during the music, which was moving to see. My friend Lisa writes a beautiful blog about the healing powers of sound for the human heart.  You can read it here.

Thank you to our audiences and to Vic King, Brian Hinton, John at Dimobla, Dee & Jayne at East Dene, Sue Birch for kind hospitality and to Lisa for being a wonderful support and documenting these events on video and camera for us to keep and share. 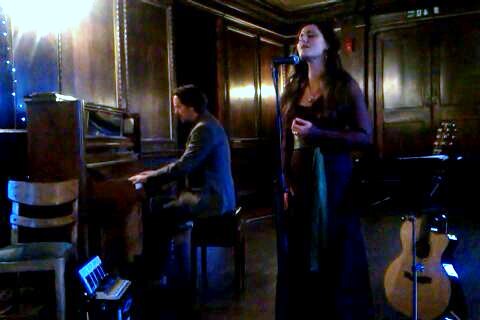 The following day we returned to Portsmouth on St Clare’s ferry and continued our voyage to London to stay at the Royal Foundation of St Katharine’s, before an early appointment the next day with my friend to St Guys hospital, near London Bridge. St Katharine’s where we stayed was founded in 1147 by Queen Matilda as a medieval hospital for the poor and infirm next to the Tower of London. I recommend this to travelling musicians, looking for somewhere clean, inspiring, peaceful and very cheap. With a library, a chapel, and cloisters, beautiful gardens, and statues, it was no ordinary hotel, more like a tranquil retreat for £50. 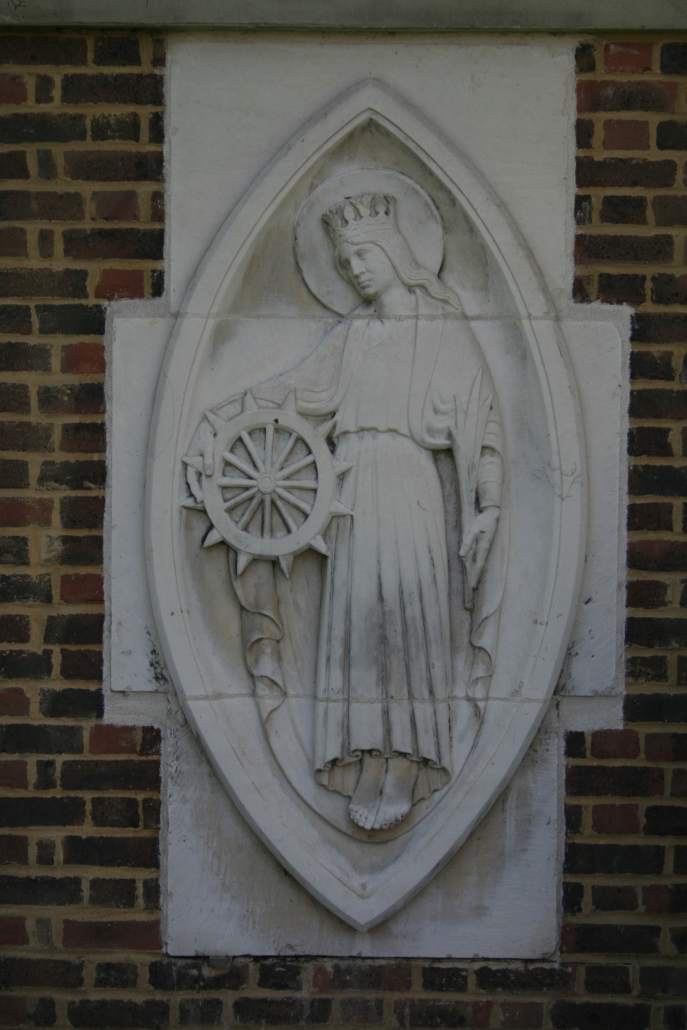 St Katharine and her wheel

The day at St Guys Hospital was in the end a surprising extension to the poetry tour. I couldn’t believe it when I saw a plaque on the wall of John Keats lodgings as he had trained at St Guys Hospital to be a surgeon of apothecary and lived on a nearby street, St Thomas! So much to my excitement (and my friends bewilderment at my reaction!) in the grounds of the hospital there was a statue of Keats and the wonderful quote carved on a bench “Sure a poet is a sage, a humanist, physician to all men.” He chose poetry over medicine as a profession, but never gave up his allegiance to apollo..patron god of poetry and healing. 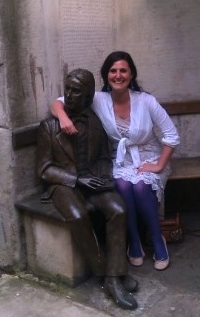 Hanging out with Keats at St Guys Hospital

Then just as we were about to leave we stumble across an old pub which happens to be a National Trust property, where Shakespeare and Dickens used to drink! His life insurance is framed on the wall. What the dickens?!! I feel like I am time travelling. Another venue now booked for the tour of “beautiful ‘public’ houses”..

To conclude I will share with you the genius wit of a 13 year old boy who came up to me in the interval of our concert and gave me my favourite review yet, leaving us all with a big smile.. “you are the voice of Wales, the female equivalent of Tom Jones with a Victorian Edge.” Who needs NME? x

Saints, songs and a sheep rescue

On Chesapeake Bay with the Cassidys
Scroll to top