A beautiful surprise to see singer-songwriter, Buffy St Marie  at Woodford Folk Festival, author of ‘Universal soldier’, ‘Until it’s time for me to go’, ‘Up Where We Belong’ (Joe Cocker/Jennifer Warnes) ‘Tall trees in Georgia’ ( Eva Cassidy) and ‘Bury my Heart at Wounded knee.’

Last year I visited South Dakota, and by chance found myself at Wounded Knee under the blood moon at a rare ceremony led by a Lakota elder and his grandchildren playing flute. Tears fell as we all stood on the mass grave of 200 Sioux men, women and children killed by the American army in a massacre that took place near Wounded Knee Creek in 1890. To find myself there unknowingly was one of the most profound moments of my life. I couldn’t believe I was standing on this sacred hill, the place I’d read about in books and heard in Buffy’s songs.

I was brought back to that moment at Woodford, hearing Buffy talk and sing about the cruel displacement of the native American Indians from their land. As Buffy sang I was back there again, standing on a small hill above Wounded Knee Creek, inside the metal railings of a grave memorial with torn prayer flags, and a Lakota woman selling dream catchers at the gate. With 10 Christian missionaries, an author, and a musician we held hands silently weeping for the lives lost, mainly women, children and new born babies. More than 200 years ago a young deaf Lakota man was innocently living in his tipi with his family by the creek, he failed to hear the order by a US soldier to give up his arms, so here we all stand. “Bury my heart at wounded knee, deep in the earth, cover me with pretty lies” sings Buffy.

I saw her play in concert in Leamington Spa, Assembly Rooms 7 years ago. She was 70 years old, in full black leather, playing the hell out of her Jew’s harp and powwow singing with her distinctive vocal tremolo. She says her secret is ‘ballet’. On the sofa at Woodford she doesn’t mention her 12 honorary degrees, two Baftas, Golden Globe awards, writing for Elvis and Barbara Streisand. She tells us about the years she spent on Sesame Street educating children of indigenous cultures, and the episode when she breast fed her baby live on TV next to big bird .. And rolls her eyes when asked about the letters she received from the Whitehouse banning her music from being played on the radio. And then there’s this …

Her reaching out to the hearts of Woodford with a beautiful new year prayer from her album ‘Power in the Blood’. Take heart and carry it on, says the Saskatchewan queen … Carry it on 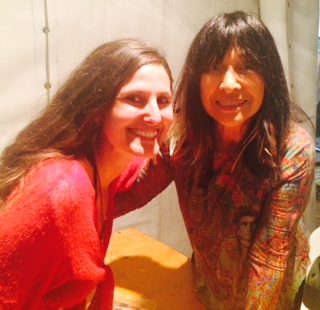 Planting for Hope in Uganda